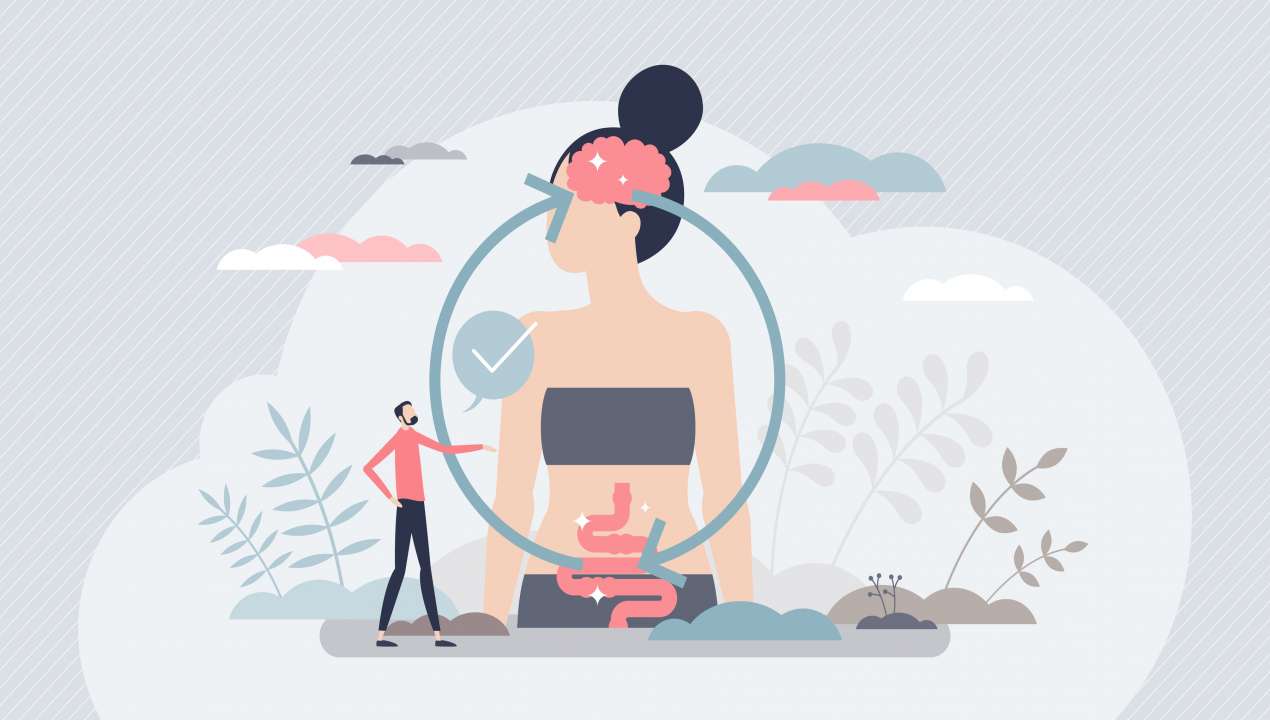 Staying sharp is as much about what you put in your belly as it is doing crossword puzzles. Researchers are discovering new evidence that different populations of bacteria in the gut are linked to neurological and psychiatric diseases like depression, autism, Alzheimer’s, Parkinson’s, and schizophrenia.

We know that the gut and the brain have a special two-way connection called the gut-brain axis. And we’ve talked about how the gut uses this connection to communicate to the brain and vice versa. Now, let’s discuss how the gut can impact the brain in the long term, and how some neurological conditions may have their roots in the gut.

The gut contains more than one kilogram of bacteria, about the same mass as the human brain. This massive population of microorganisms can communicate with our bodies by releasing neurotransmitters, immune-modulating molecules, and metabolites that are recognized by the stomach lining. A few key compounds involved in these gut-brain processes include tryptophan, dopamine, serotonin, noradrenaline, and short-chain fatty acids.

The absence or presence of these gut-derived molecules could shift the balance between health and disease. And over a lifetime, these accumulated changes can exacerbate neurological diseases.

The Gut and Neurodegenerative Diseases

Studies on mice have found that the microbiota between young and old mice are quite altered, with the aged animals having a higher level of bacterial populations associated with inflammation and higher intestinal permeability. That means their gastrointestinal lining is less capable of protecting the elderly mice from bacteria entering into the bloodstream, where they can bring on the inflammatory response. Compared to young mice, older mice have higher concentrations of circulating pro-inflammatory molecules which can lead to inflammation of the brain.

Several neurological diseases are related to aging populations and increased chronic inflammation. For example, individuals over the age of 65 have a higher risk of developing neurodegenerative diseases like Alzheimer’s and Parkinson’s disease. Evidence shows a link between these neurodegenerative diseases and gut health. The nerve fibers that connect the brain to the gut in patients with Parkison’s disease have been found to contain a protein, alpha-synuclein, which is the protein that accumulates in the brain during the progression of the disease. Some researchers speculate that the microbiome plays a role in the misfolding of the protein that results in its accumulation.

In Alzheimer’s, the brains of individuals who suffer from the disease accumulate plaques made of insoluble protein, which cause the neurons to slowly die and result in dementia. Alzheimer’s patients have been found to have elevated levels of pathogenic bacteria, which induce inflammation, residing in their guts. The presence of pro-inflammatory bacteria could lead to widespread chronic inflammation that exacerbates the neurological problems associated with the disease. Researchers have found that if mice displaying Alzheimer’s-like symptoms are treated with antibiotics, fewer plaques are found in their brains. The study suggests that gut microbiota may have some influence on the progression of the disease.

The Role of the Gut in Autism Spectrum Disorder

Another fascinating avenue of research into the world of gut health has been the relationship between Autism Spectrum Disorder (ASD) and the gut microbiome. ASD is a developmental disorder that represents a constellation of symptoms that include communication challenges, repetitive behavior, restricted interests, and the inability to read social cues. One characteristic of ASD is rigidity in feeding behavior. Individuals with ASD tend towards preferring starchy, processed foods and rejecting many fruits, vegetables, and proteins.

Researchers hypothesize that these rejected foods may cause gastrointestinal discomfort, bloating, and irritable bowel symptoms due to the altered gut microbiome found in those with ASD. Many of these gastrointestinal issues come along for the ride for those who live with ASD. Experiments conducted on animals have shown that mice raised without bacteria living in their gut, through some intervention like antibiotic treatment or Cesarean birth in a sterile environment, demonstrate altered behavior patterns. Germ-free mice suffer from more anxiety and are less social with other mice. They also struggle with tasks that require memory and cognitive function.

One gut-residing bacteria, called Clostridium tetani, may play a role in the development of ASD. Scientists studying the connection between the gut and ASD speculate that this bacteria produces a neurotoxin that impacts the brain and causes behavior issues. Treatment with antimicrobial compounds has been shown to reverse some of these behavioral symptoms found in ASD patients. 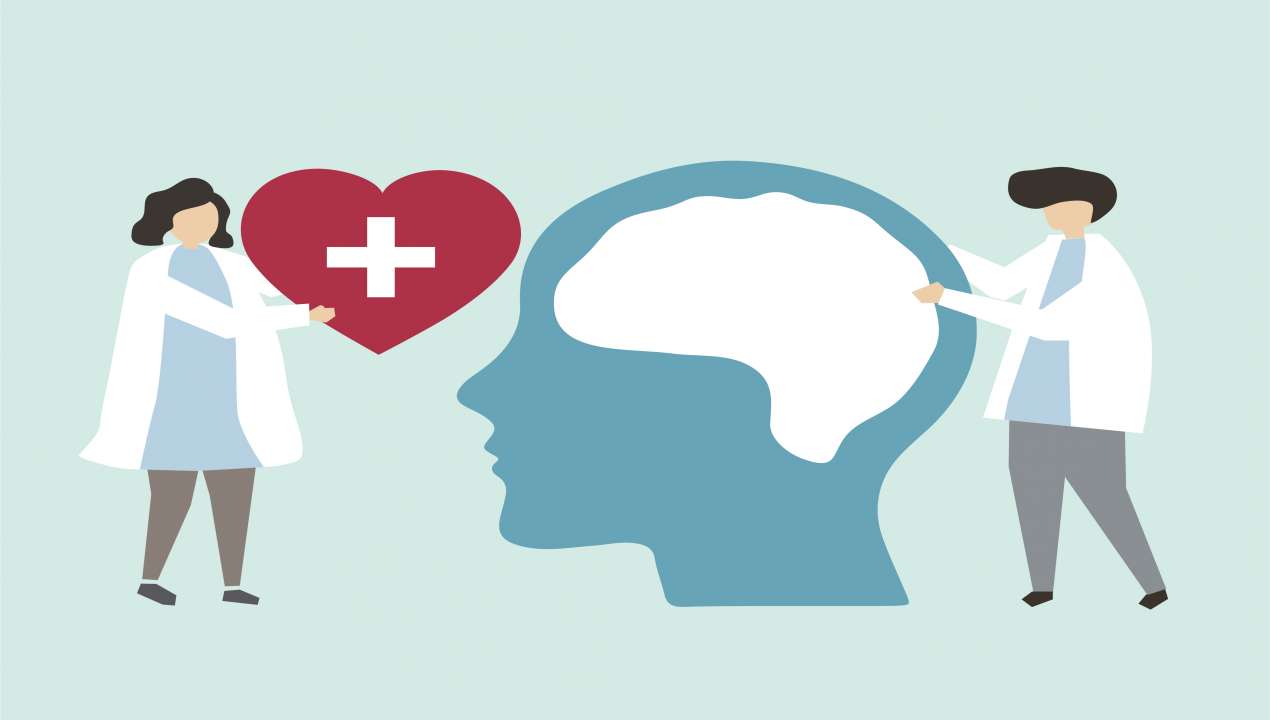 Schizophrenia and the Gut Microbiome

Schizophrenia is another disorder that has ties to the gut. One microorganism known as Toxoplasma gondii can take up residence in the gut and increase the risk for schizophrenia. Additionally, premature delivery increases the risk of developing schizophrenia. Babies who are born prematurely require Cesareans, which bypass the natural inoculation of the infant microbiome with the mother’s vaginal bacteria.

Infants born via Cesarean section have lower numbers of good bacteria, including members from Bifidobacteria and Bacteroides, and a higher population of Clostridium difficile, a known pathogenic microorganism. C. difficile produces an amino acid derivative that causes neurodevelopmental problems, with cases of schizophrenia and autism linked to the presence of this bacteria. In germ-free mice, researchers found that without a gut full of beneficial microbes, these mice also displayed schizophrenic-like behavior.

The modern rise in neurological and psychiatric disorders could be a symptom of an imbalance with our trillions of microscopic friends. We take for granted the power the gut plays in the development of our most cherished organ, the brain. While our modern world is trending towards cleaner, more sterile, and more sanitary spaces, some of the bacteria we have co-evolved with are being left behind. With fewer beneficial populations in our gut, that means less altruistic bacteria can start to take up residence, affecting our brain health for the long term.