Roots of Revolution: Food for Good With Max Rye

From technopreneur to head of a revolution. TurtleTree co-founder and Chief Strategist, Max Rye, shares his thoughts on why it’s time to make food for good. 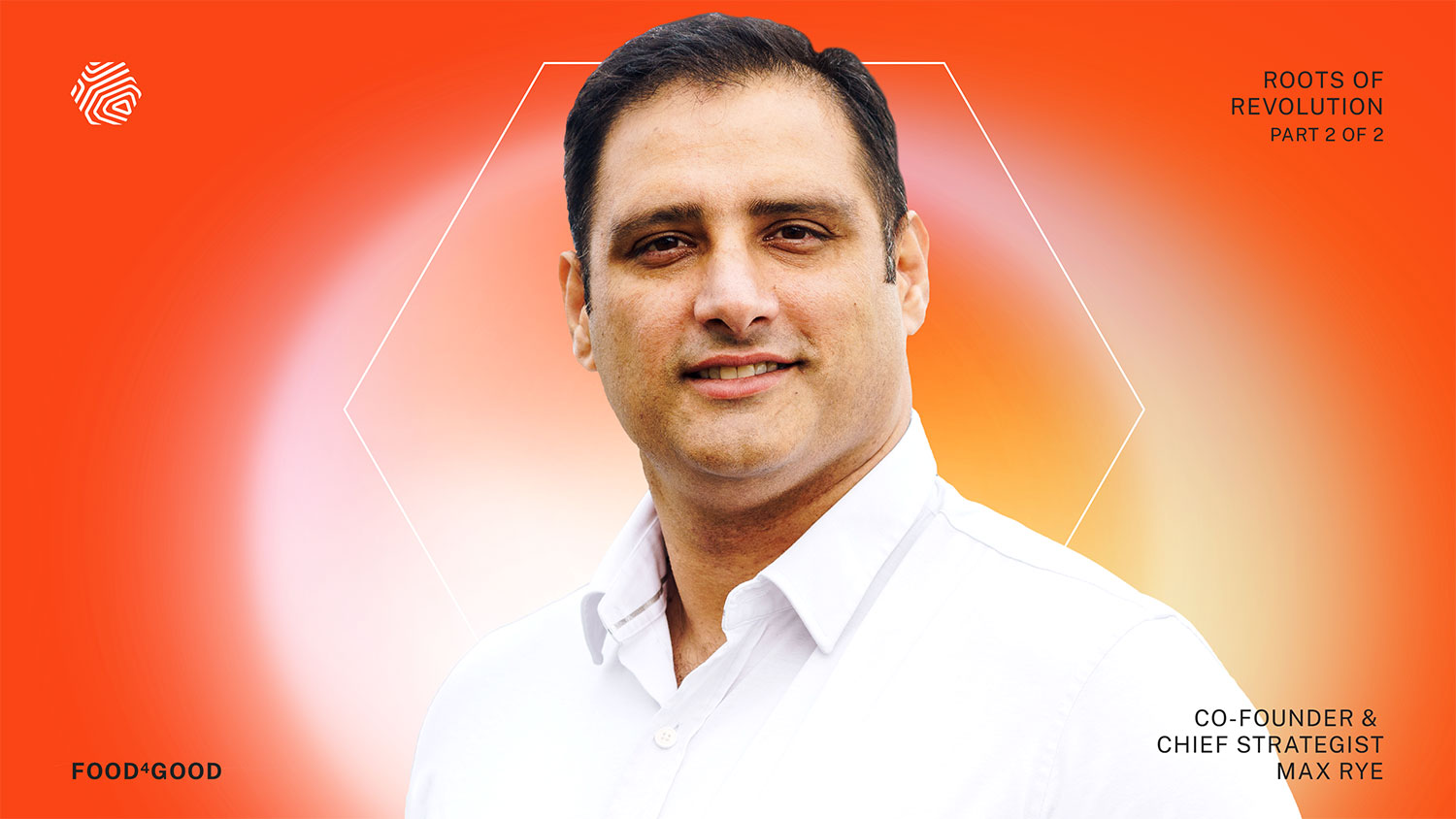 Roots of Revolution: Food for Good With Max Rye
Facebook0Tweet0LinkedIn0Email0

Tech is all about keeping people at the heart of things. You can’t create in a vacuum—after all, you are innovating to solve a pressing problem. When I was the CEO of a tech company, I devoted all my time to improving accessibility to information. I was creating intricate IT systems that would connect people to new tools and platforms, all with a goal to help people earn, work, and live better. I was working hard to push out faster and better systems. Yet, I simply couldn’t ignore the fact that my pursuit was happening against a backdrop of increasingly recurrent headlines about the climate crisis.

These headlines weren’t just phrases on a screen. They became etched into our daily realities more and more with each passing day. Cranking up the AC as summer heat records outdid themselves each year; friends and family reaching out for help when their homes were destroyed by yet another natural disaster; reports of soaring food prices jolting you awake more than a morning cup of coffee: this was becoming my new reality, and the reality of so many others around me.

It was especially crazy to me that even though the data told the facts—one of the biggest culprits behind these problems being our food system—nobody was doing anything about it. Why were we allowing ourselves to eat away at our own future?

These questions only compounded when I met my co-founder, Fengru. Like me, she had come from the tech industry. But unlike me, she had personally witnessed just how unsustainable our food production methods were. Factory farming was degrading the health of the land, producing food that was detrimental to our health, and was creating an unnecessarily cruel life for animals. It quickly became apparent that the question those of us in tech now had to consider was: what wasn’t tech yet doing for our food system?

If tech was meant to solve pressing problems, then it was clear that it wasn’t IT systems that I had to build anymore. It was building a brand new food system instead.

It doesn’t take a specialist to diagnose the most apparent problems of our food system. To put it mildly, the system currently leaves much to be desired. To put it bluntly, it’s killing us. Apart from just producing food, our current food production methods are also creating more problems for the planet and people.

99% of all animal products in the US come from factory farms, which produce food that contains multiple kinds of toxins harmful to our health. This method of food production also creates huge amounts of toxic runoff that find their way into the land, our water bodies, and the air. For the numerous local communities living near such farms, their daily reality looks like being denied access to clean air, safe drinking water, and food that hasn’t been contaminated by toxic waste—now seeped into the soil on which their food is grown. Food is meant to nourish, so why are we putting up with food production methods that harm our health and which make it a terrible world to live in?

It’s also ironic how factory farming, despite its thoroughly inhumane approach of packing so many animals into a cramped space, is still not producing food fast enough. The whole concept of rearing animals to maturity is a thoroughly inefficient one. Apart from having to wait for the animals to reach full maturity, there’s also the need to grow the crops needed to feed these animals. The solution to this has been to pump livestock with hormones and to spray crops with copious amounts of pesticides—all of which we ingest.

And while we are spending time clearing large swathes of land to house both livestock and crop production, 1 in every 4 people, or 1.9 billion people, remain food insecure every day. Contrary to popular belief, this isn’t a problem that’s just relegated to low-income countries or rural communities. It’s a problem that all of us, even those living in the wealthiest and most urbanized nations, have to eventually contend with as traditional food production methods continue to deplete the health of the planet even further, making it impossible for us to grow the food we need.

It’s clear that there are countless problems a new food system has to address. But besides just fixing what’s broken, we also have to look at what we can do better. How can we optimize the food we create so that it meets the nutritional needs of modern living, whether they are health needs, specific dietary requirements, or lifestyle choices?

Making Food for Good, for Good

Creating pathways to accessibility has always been one of tech’s greatest capabilities. When I made the leap into the world of food, I knew we had to use this advantage to make quality nutrition a reality for everyone, all without harming the planet anymore than our current food system already has.

With that thought, we recently launched Food Intelligence, an innovative framework that unites insight, information, and nutrition for better food production using tech. The problems with our current food system are nuanced, and any solution to it requires a multifaceted approach to holistically meet the nutritional needs of people today.

With Food Intelligence, our vision for food is more than just making nuggets or burgers that don’t involve harming animals; it’s about crafting culturally appropriate foods that meet basic nutritional needs and also goals, while taking care of the planet, our shared home. It’s also about enabling people to thrive in the ways they want to. After all, food is much more than just about staying alive. It’s about living, and being nourished to be who you want to be, and to do all that you want to. That’s what good food of the future looks like.

Making good food through Food Intelligence is our commitment to ensuring that our future food system will not break down the way our current one has. We are building a future where generations to come will always have access to food that’s healthy, nutritious, sustainable, and delicious. We’re setting up a new future where we can savor good food, for good.

Shaking up the whole food production system will not be an easy feat. But we know that as long as we keep people at the heart of things, the question will no longer be about what tech hasn’t done yet for our food system. Rather, it’ll be what tech can do next. It’s a boundless road ahead.

To learn more about TurtleTree and our vision of food, be sure to connect with us here.